Mesothelioma and Marines are linked due to asbestos exposure. Veterans of the U.S. Marine Corps were exposed to this deadly mineral in tanks, vehicles, barracks and Navy ships. If you're a veteran of the Marine Corps, you can receive compensation for any asbestos diseases like mesothelioma or lung cancer.

Get Your Free Guide Now

Get Your Free Guide

Carl Jewett is a retired lieutenant commander of the U.S. Navy. He served in active duty for 24 years and now helps veterans with mesothelioma file for VA benefits, such as compensation and health care. Jewett is an expert in all aspects of veterans mesothelioma assistance and knowledgeable of the military's use of asbestos in each branch. As a content reviewer for Mesothelioma Guide, he ensures the accuracy, clarity and completeness of all information related to veterans asbestos exposure, mesothelioma rates among veterans, and VA benefits for veterans or surviving loved ones affected by this cancer. Read More

JUMP TO A TOPIC

Important Facts About Mesothelioma and the Marines

United States military veterans have high rates of mesothelioma. Veterans of the Marine Corps served in a lot of locations with asbestos present.

There are fewer active U.S. Marines than Navy or Army members:

However, Marines were exposed both at sea and on land due to the versatile nature of their assignments. The Boston VA treated three former Marines with mesothelioma from 2011-2016. This was around 5% of the veterans with mesothelioma.

Steve McQueen, a famous actor, developed mesothelioma in the late 1970s. McQueen said he was exposed to asbestos during his Marine Corps service from 1947-1950. He was diagnosed in 1979 and died around one year later.

McQueen said in an interview he remembered asbestos around pipes in ship engine rooms. He was tasked with removing the excess asbestos.

"Veterans are the largest group of patients diagnosed with mesothelioma each year."

Veterans are entitled to benefits through the VA.

"Veterans are the largest group of patients diagnosed with mesothelioma each year."

Veterans are entitled to benefits through the VA.

Asbestos and Marines: Where Exposure Occurred

Marines had the unique role of serving on ships and in barracks, both places filled with asbestos. The military relied on asbestos through the early and middle parts of the 20th century. The usage surged during and after World War II. It only subsided during the late 1970s.

Navy ships were built with pounds of asbestos. The mineral is fire-resistant, and it protected ships from catching fire while at sea. Marines transported on Navy ships were exposed from:

Since these ships were built with asbestos, shipyards also contained a high volume of the mineral. Marines who served in shipyards may have encountered asbestos in close proximity, which is how mesothelioma and asbestos lung cancer develop.

The fear of fire also applied to military aircraft. Asbestos was used throughout planes to insulate them during travel or combat. Marines serving on attack and fighter jets — or other planes — were likely exposed and at risk of getting cancer later in life.

Military barracks were notorious for asbestos. The mineral was in ceiling tiles, pipes, insulation, electrical wires, roofing and flooring materials, and more.

On-site military housing also was rampant with asbestos. A report from May 2020 by the Department of Defense Office of the Inspector General revealed that thousands of housing units may include asbestos.

The investigation found that there wasn’t adequate record-keeping of asbestos in some of these units. Therefore, there was no way to monitor the condition of asbestos. In other houses, the military didn’t let occupants know asbestos was present.

The Environmental Protection Agency declared the Marine Corps Air Station in Yuma a superfund site in 1990. Asbestos contamination was part of the reason for the agency’s decision.

The agency said, “Chlorinated solvents were detected in a groundwater monitoring well on the station.” By 2001, all visible asbestos-containing materials were removed. Two treatment systems lowered contaminant levels in the station’s soil. 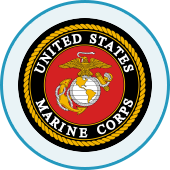 Marine Corps Veterans Can Get Compensation

If you developed mesothelioma after service in the military, we can help you get the compensation you deserve, quickly and easily.

If you developed mesothelioma after service in the military, we can help. Our VA-accredited claims agent, retired LCDR Carl Jewett, has helped thousands of veterans receive the compensation they deserve, quickly and easily.

Commander Jewett can help you:

Help for Marine Veterans With Mesothelioma

Former Marines are not left to fight their mesothelioma alone. There are monetary resources and treatment options available to help Marines with this disease.

Treatment for Marines With Mesothelioma

The U.S. Department of Veterans Affairs provides free health insurance to most Marines with mesothelioma. This health care includes treatment at VA hospitals.

Monthly compensation for Disability Claims is around $3,146. VA Pension payments are based on income, and often lower, but they can help offset medical bills.

Surviving loved ones can also receive benefits from the VA for their deceased marine veteran’s mesothelioma.

Marine veterans with mesothelioma can explore legal claims. These are separate from VA claims, and veterans can receive both types of compensation.

VA claims agent Carl Jewett is a 24-year Navy veteran. He has helped members of every branch file for mesothelioma benefits. We recommend contacting him to start a claim for your mesothelioma compensation. He can also refer you to one of the top law firms representing veterans with mesothelioma. These lawyers specifically work on Marines and mesothelioma cases.

How often do Marines develop mesothelioma?

Since mesothelioma is rare, there aren’t many cases of Marines diagnosed with the cancer. However, they do happen. Steve McQueen, a famous actor and marine veteran, died of mesothelioma.

Where were Marines exposed to asbestos?

Asbestos is a fire-resistant substance, which the military used liberally in ships, aircraft, barracks and elsewhere. Marines were exposed in these settings.

What benefits are available to Marine Corps veterans with mesothelioma?

The Department of Veterans Affairs provides financial benefits through Disability Compensation claims and Pension claims. Other benefits include money for surviving loved ones, free health care, and access to state-of-the-art treatment.