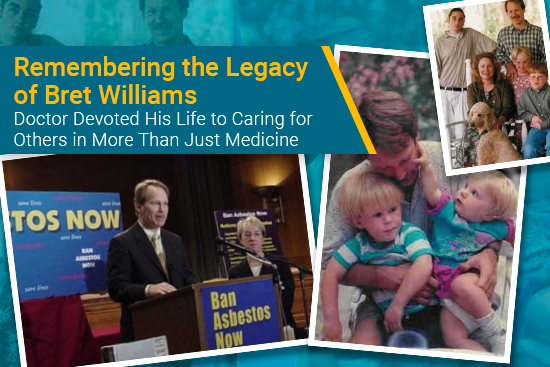 Remembering the Legacy of Bret Williams: Doctor Devoted His Life to Caring for Others in More Than Just Medicine

Angela Bullock is a very knowledgeable and experienced mesothelioma attorney at Bullock Campbell Bullock & Harris, PC. She began practicing law in 1997 and has since dedicated her career to advocating for victims of asbestos and mesothelioma. She is devoted to helping mesothelioma patients and their families receive justice and fair compensation.

Dr. Williams was a client of Angela’s, and he inspired her to continue advocating for mesothelioma patients and push for the ultimate ban of asbestos. Angela wrote this article to honor Dr. Williams’ legacy and spread awareness of this devastating illness.

Bret Williams, M.D. was a loving father, husband and physician who dedicated his life’s work to improving the lives of underserved patients throughout the world. Bret also bravely fought mesothelioma, a rare, aggressive cancer of which the only known cause is asbestos exposure, before his passing 15 years ago.

His fight with mesothelioma – along with the support he showed mesothelioma patients, the work he did to help asbestos exposure victims achieve justice, the mission work he accomplished, and the advancement of research for this cancer – deserve to be remembered and honored.

Growing up as a playful kid, Bret ran around Lawrence, Kansas, east of downtown with his brothers innocently playing mischievous pranks. His mom gave up trying to squelch their hijinks, making the Williams boys the stuff of Lawrence legend.

Bret attended the University of Kansas in 1968 and shortly thereafter joined the Sigma Nu fraternity. The fraternity house on Sigma Nu Place was in a bit of disrepair and in need of remodeling as well as dormer additions. Bret raised the funds and recruited some fraternity brothers to stay the summer, volunteering their time to repair and build an addition to the house. Bret enjoyed attending KU men’s basketball games watching his Sigma Nu brother, Dave Robisch, on the court at Allen Fieldhouse.

Bret then attended the University of Kansas Medical School and completed his internship and fellowship at Duke University Medical Center. The grandson of a prominent Lawrence banker for whom The Williams Fund, the fundraising arm of the KU Athletics, is named, a young Bret could have rested on the comforting life of privilege he was afforded, but he always knew he had a higher calling to care for those less fortunate who might not have access to any medical care at all.

Staying true to his life’s passion – reaching out to those who are medically underserved – Bret took his skills to East Africa where he worked in the developing areas of Tanzania and Kenya. Following this mission work, he and his family went to Bolivia where he volunteered at a medical clinic in the Andes Mountains, providing care to the Aymara Indians. Coming back to the United States, Bret and his family moved to Daufuskie Island, South Carolina, where he started the Daufuskie Island Clinic and served as Medical Director. Bret also served five years as Medical Director for the Volunteers in Medicine Clinic of Hilton Head, South Carolina, a model free clinic for the working poor. He often mentioned that his last years he spent as a “country doctor” (as Bret would so proudly term it) in Caswell County, North Carolina, were his most fulfilling.

Bret was diagnosed with malignant pleural mesothelioma in 2003 and underwent an extrapleural pneumonectomy, a radical surgery to remove a lung and scrape his chest cavity lining of residual mesothelioma tumors. Even in much pain and very short of breath, he continued to work part-time at the clinic, “enough to keep my family above water,” he said.

Bret also worked diligently as a supporter of the Mesothelioma Applied Research Foundation (Meso Foundation) as well as an advocate for justice for mesothelioma patients and their families. He called on Congress to completely ban the use of asbestos and lobbied the U.S. Senate to block the growing importation of still-legal asbestos.

On one of his better few days in 2005, Bret and his wife, Julie, even traveled to Washington, D.C. to visit senators and representatives to advocate for research for early diagnosis of mesothelioma, treatment options, and a cure, as well as for asbestos victims’ access to legal justice.

Even as he was pushing himself for each day’s survival, Bret selflessly stated, “My real concern is for the many others yet to become ill, those who were exposed by serving their country, firefighters and other relief personnel at Ground Zero in New York, teachers, blue collar workers, and also others like me: folks who worked with common, everyday products they had no idea were toxic.”

I accompanied Bret and Julie to the U.S. Capitol, and I was inspired as he passionately stressed to our lawmakers that the companies that manufactured asbestos products knew of their asbestos products’ hazards. He called for a complete ban of asbestos-containing products. A ban that just now, 17 years later, is as close as ever before thanks to President Joe Biden and the current Environmental Protection Agency’s latest push for more regulations.

Bret was also concerned about the current mesothelioma victims of asbestos. As both a physician and patient, he had witnessed from both perspectives the highly positive impact on patients’ health and mental well-being that a solid, personalized physician-patient relationship offers. He founded the Meso Foundation patient-physician alliance to help promote patient safety and improve the quality of patient care.

I had the extreme pleasure to represent Bret and Julie with their mesothelioma legal compensation case. Since mesothelioma is very rare (approximately 3,000 people each year are diagnosed in the U.S.), mesothelioma patients are scattered far and wide throughout the country with no easy way to connect and certainly not in 2004 before widespread use of social media.

Sadly, I know numerous mesothelioma patients and their families, as they are my clients. Bret, the ever-compassionate doctor, told me to let every one of my clients know they could call him anytime for anything, and he urged me to give them his phone number and email. I did as promised, and Bret quickly built up a good-sized support group of fellow mesothelioma patients and their families akin to the Facebook support groups of today. He would share diet tips for physical strength along with Bible verses and prayers for spiritual strength.

Bret continued to inspire mesothelioma patients and families as well as anyone who met him. He always said, with hope, “Every day is a gift.”

Then in May of 2007, his encouraging emails stopped. Mesothelioma was just too much for his body. Julie, who had been Bret’s mesothelioma caregiver, took up Bret’s fight for more mesothelioma research to help current and future patients while honoring his memory.

The fight against mesothelioma is far from over, but Bret’s perseverance and dedication to advocating for mesothelioma and asbestos victims has resulted in the enactment of important regulations and the formation of organizations that enhance a patient’s care and provide access to helpful resources. I will continue to uphold his legacy by advocating for my clients, mesothelioma research and a complete ban of asbestos.

Together, we can win this fight – in Bret’s honor.