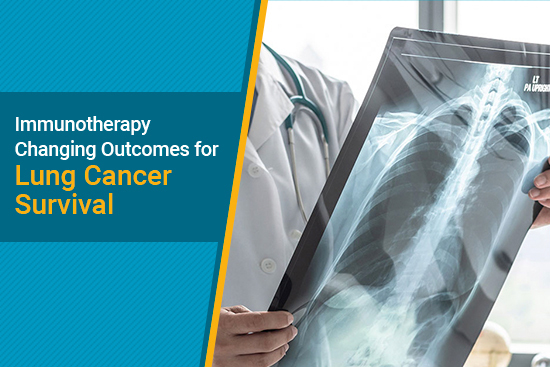 One of the biggest concerns for cancer patients is that their tumor will return or begin growing again. This fear is also relevant for lung cancer and mesothelioma patients.

Fortunately, immunotherapy and other targeted therapies are reducing the rates of recurrence for many lung cancer patients and improving survival rates.

The 5-year lung cancer survival rates increased by 21% — from 21% in 2014 to 25% in 2018, according to the 2022 State of Lung Cancer Report published by the American Lung Association. While this is an incremental change, it’s a major step forward.

“A 21% increase in five-year survival is good, said Dr. Jeffrey Crawford, a medical oncologist at Duke University Health. “I don’t think there are too many other groups that have seen that level of improvement.”

As part of Lung Cancer Awareness Month, the Mesothelioma Guide staff is publishing a series of blogs about lung cancer incidence, screening, and new treatment options. This article focuses on the power of immunotherapy for lung cancer and how immunotherapy is preventing lung tumors from returning. This is important for all lung cancer patients, even those with lung cancer from asbestos.

The U.S. Food and Drug Administration has made approving immunotherapy drugs a priority for lung cancer due to the high incidence. More than 230,000 people in the U.S. each year are diagnosed with lung cancer, and the 5-year survival rate is only 23%.

The monoclonal antibodies for non-small-cell lung cancer are:

The targeted therapies for non-small-cell lung cancer are

Patients who received this regimen of immunotherapy and chemotherapy had a 23% reduction in risk of death. Nearly 33% of patients were alive at least two years versus just 22% of patients receiving only chemotherapy.

The FDA also approved nivolumab (brand name Opdivo) in March of 2021. This was the most recent approval of immunotherapy for lung cancer.

Cemiplimab is sold under the brand name Libtayo. The checkpoint inhibitor led to a median overall survival of 22 months, and the 1-year survival rate was 66%. These figures are much better than the overall averages for all patients with lung cancer.

Immune checkpoint inhibitors are a type of immunotherapy that blocks the interaction between two proteins: one on cancer cells and one on immune cells. Cemiplimab blocks the proteins PD-1 (immune cells) and PD-L1 (cancer cells).

Ipilimumab and tremelimumab, also approved for lung cancer, are other immune checkpoint inhibitors but target a different set of proteins. They block CTLA-4 and B7 from interacting. Ipilimumab (brand name Yervoy) is often combined with Opdivo to treat different types of cancer. Tremelimumab (brand name Imjudo) is combined with durvalumab (Imfinzi).

A couple of recent studies pinpoint the benefit of immunotherapy for lung cancer survival. An article published on MedPageToday noted that pembrolizumab led to a 5-year overall survival of 32%. This survival rate was double that of patients receiving chemotherapy.

The median survival was also nearly twice as high for immunotherapy patients: 26.3 months versus 13.4 months.

A different study of 20 surgery patients highlighted how immunotherapy helps before surgery. The New England Journal of Medicine paper specified that non-small-cell lung cancer patients received immunotherapy before surgery and 45% (9 of 20) had a positive tumor response.

Using Immunotherapy Before Other Therapies

In a study of non-small-cell lung cancer patients, immune checkpoint inhibitors worked as a first-line therapy. They improved the outcomes for patients receiving ramucirumab (VEGF-targeted immunotherapy) and docetaxel (chemotherapy).

Around 100 patients received an immune checkpoint inhibitor followed by this combination of immunotherapy and chemotherapy. The disease-control rate was nearly 75%.

He added that the most progress occurred for patients with stage 1B to stage 3B lung cancer and even for patients who had surgery before or after immunotherapy. The benefit is a reduced risk of the disease returning after resection.

For more information on the evolution of lung cancer treatment, visit the Lung Cancer Research Foundation. This non-profit organization is also an opportunity to donate towards lung cancer research during Lung Cancer Awareness Month.

If you’d like more information on lung cancer treatment options, email our registered nurse Karen Ritter at karen@mesotheliomaguide.com to begin a conversation.