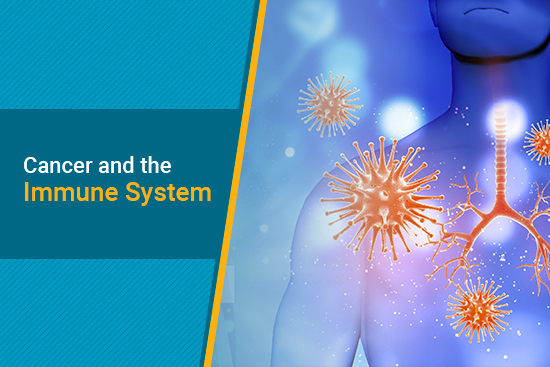 Cancer and the Immune System

The immune system protects the body from foreign invaders, such as bacteria, viruses, fungi and toxins. However, the immune system struggles to defend the body against cancer – especially on its own.

What Is the Immune System?

The immune system is a strong and complex network of cells, organs, blood vessels, lymph nodes and more. There are five cells in the immune system responsible for fighting off cancer and infection: macrophages, dendritic cells, natural killer (NK) cells, B-cells and T-cells.

The immune system is also made up of the lymphatic system, which is a network of vessels and lymph nodes. These nodes help produce T cells to fight infections and diseases, and the vessels speed up the immune response.

Although there is a substantial defense team within the immune system, it seems to fall short when facing cancer cells.

How Does Cancer Impact the Immune System?

The immune system is always on high alert for any signs of danger, like bacteria and viruses. Tumors, however, can often bypass the immune system and expand uncontrollably. When the immune system becomes overpowered by a malignant tumor, it can no longer accurately identify and respond to threats.

In order to combat intrusive cells and tumors, the immune system relies on specialized cells known as T cells, which are responsible for recognizing and attacking invaders. The immune response begins when these T cells encounter antigens – molecules on the surface of foreign invaders such as bacteria or viruses. Once an antigen has been identified, a series of chemical signals are sent out by T cells, activating other immune cells to respond and eradicate the pathogen.

Just as the immune system is smart and powerful, cancer cells are, too. For example, they may produce a molecule that masks the presence of an antigen, preventing it from being recognized by T-cells. Sometimes, cancer cells may produce chemicals or proteins posing as an almost “invisibility cloak” for themselves, hiding them from T cells, so they can continue to grow and divide unimpeded.

While evading the immune system’s detection is one aspect, cancerous tumors can also actively suppress it. This is called immunoediting, a process in which the tumor releases molecules that both inhibit the function of certain immune cells and activate others that can be beneficial to its growth and survival. In some instances, cancer cells may release a protein stimulating the activity of regulatory T cells, which prevents other immune cells from recognizing and attacking tumor cells.

Just as current therapies, like chemotherapy, can temporarily disrupt some of these defense mechanisms, cancer has also found ways around these treatments. Tumors may develop resistance to chemotherapy by increasing the expression of a gene called P-glycoprotein (Pgp), which pumps chemotherapeutics out of the cell before they have time to have any effect.

The effects of cancer alone can be detrimental to the body, but cancer treatment can also have long-lasting effects on the body and the immune system.

There are many forms of cancer treatment, all with different approaches. Each type of treatment has different effects on the body and the immune system.

Radiation therapy exposes cancer cells to energy waves that can kill or stunt the cells growth. Radiation will kill cancer cells, but it may also damage healthy cells that could affect the rest of the body’s functionality.

Immunotherapy has similar side effects to chemotherapy, but they often present themselves less often and as less severe. Some side effects of immunotherapy may be fatigue, nausea, dizziness, weakness, body aches and skin rashes.

How To Boost the Immune System After Cancer Treatment

It is important to maintain a healthy lifestyle during and after cancer treatment. By eating a balanced diet, resting well, and exercising regularly, you can improve your chances of recovery and potentially speed up your recovery time.

A few ways to boost the immune system after cancer are:

Cancer can have long-lasting effects on the body and the immune system. It is an aggressive illness composed of intelligent cells that know how to survive in the body.

How does the immune system work? When it comes to cancer, it’s complicated. Cancer Treatment Centers of America. Retrieved from: https://www.cancercenter.com/community/blog/2017/10/how-does-the-immune-system-work-when-it-comes-to-cancer-its-complicated. Accessed: 10/24/22.

Why People with Cancer Are More Likely to Get Infections. American Cancer Society. Retrieved from: https://www.cancer.org/treatment/treatments-and-side-effects/physical-side-effects/low-blood-counts/infections/why-people-with-cancer-are-at-risk.html. Accessed: 10/24/22.

What is Cancer? National Cancer Institute. Retrieved from: https://www.cancer.gov/about-cancer/understanding/what-is-cancer#:~:text=Cancer%20cells%20can%20break%20away,and%20spread%20into%20surrounding%20tissues.. Accessed: 10/27/22.

Are All Cancer Survivors Immunocompromised? Healthline. Retrieved from: https://www.healthline.com/health/cancer/are-cancer-survivors-immunocompromised. Accessed: 10/31/22.

About the Writer, Camryn Keeble

About the Writer, Camryn Keeble